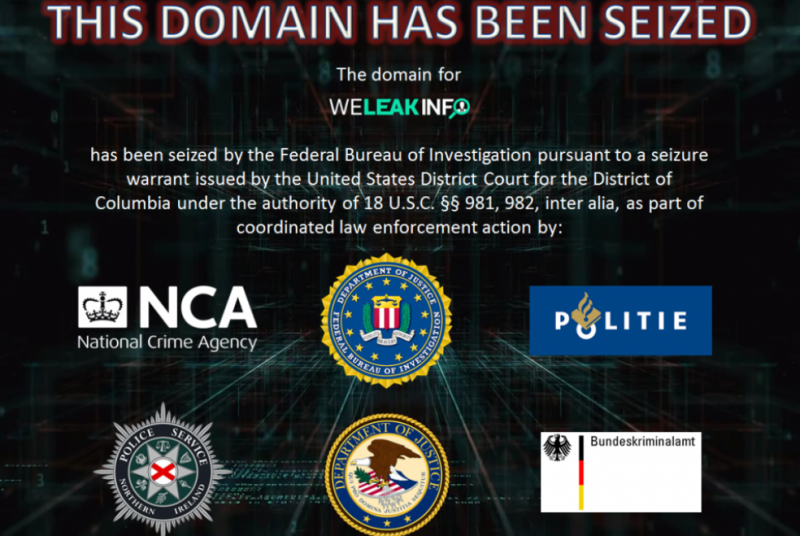 The WeLeakInfo “data breach notification” domain is no more.

The feds and international law enforcement have taken down a website that was selling access to billions of stolen personal records.

The FBI and the Department of Justice said on Thursday that they, in conjunction with the Dutch police, the United Kingdom’s National Crime Agency and Germany’s Bundeskriminalamt, have seized the internet domain name “weleakinfo.com,” effectively suspending its operations. Separately, in conjunction with the case, the Oost-Nederland police arrested a 22-year-old in Arnhem, Netherlands; and, a 22-year-old man in Northern Ireland was also taken into custody, according to local reports.

However, the authorities are still on the hunt for any other suspected operators and owners of the site, and are asking for information as to their whereabouts via the FBI’s Internet Crime Complaint Center (IC3).

WeLeakInfo, despite its name, marketed itself as a legitimate data-breach notification company; it provided subscription services where users could sign up for one-day trial for $2, a week for $7, a month for $25 or three months for $70. Users would gain access to a search engine, used for perusing more than 12 billion personal records gleaned from 10,000 different data breaches. The records contained the usual cybercrime goodies: Names, email addresses, usernames, phone numbers and passwords for online accounts, according to the DoJ. However, it’s self-description on Twitter gives a more altruistic spin on its wares, framing itself as a HaveIBeenPwnd-like service: “Have your passwords been compromised? Find out by searching through over 12 billion records and 10,000 data breaches.”

The site itself seemed blindsided by the action, judging from this tweet:

anyone else find it odd that instead of just shutting the site down that an investigation team would post a pic up saying it has been seized?

This is a Fake. The same picture was used as April Fool’s Day.4:37 PM – Jan 16, 2020Twitter Ads info and privacySee Akt Veron’s other Tweets

And many have taken to the Twitterverse to complain that their subscriptions just started and to request refunds:

“With execution of the warrant, the seized domain name – weleakinfo.com – is now in the custody of the federal government,” according to the FBI’s notice. “Visitors to the site will now find a seizure banner that notifies them that the domain name has been seized by federal authorities.”